This term we’ve started a series on Bible Heroes at Toddler Church, inspiration taken from the book Bible Heroes! by Eleanor Zuercher (Not Sunday, Not School). Eleanor used to run a youth event in my Mums parish called Acorns and Saplings. It was very similar to Messy Church, but before messy church took off, and without the food. The books that Eleanor have written were tried and tested at Acorns and Saplings, and as I used to be a leader there, I can remember doing a lot of the activities. She’s written another book called Through the Year with Jesus (Through the year with Jesus). If you haven’t come across her books before and run youth work for 3-11 year olds they’re well worth a look. The activities are a little complex for the toddlers, but there’s normally something in each section that can be used or altered, or at least act as a springboard for ideas.

Last week we started back with the story of Abraham, focusing on how God blessed him with a big family, who were as numerous as the stars in the sky and the grains of sand on a seashore. The idea we took from the book was finger-painting a crowd. You were supposed to then draw faces onto them and write a passage on, but the kids got a bit carried away and this was the result: 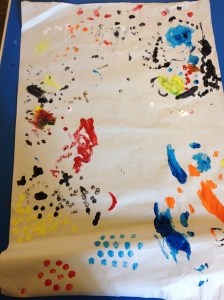 They really enjoyed it, but it didn’t look much like a crowd so we just left it how it was and they got back to the important business of playing. I’m not particularly fussy about the outcome of the crafts we do at Toddler church, as long as the children are engaged and enjoy them that’s the main thing. With those outcomes the craft was a success.

The following week another leader, Sue, led the session on Joseph. She told the whole story, which was potentially a bit long for the little ones as they did get a bit restless, but a couple of them were able to feed parts of the story back so they must have engaged with at least some of it. They then had two crafts, one was making multi-colour coat name badges, and the other was a colouring sheet. 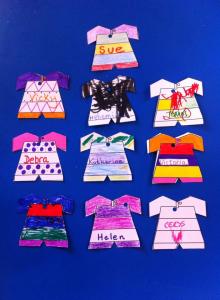 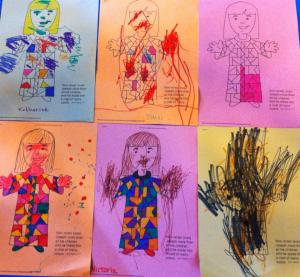 It was interesting to see the different ability with kids colouring in. Some of them went for the messy scribbling option, as you can see, but others chose to go for neat, keeping between the lines drawing. Colouring in will keep that age group entertained for ages though. For something so simple, it keeps their attention so well and it took ages for them to get distracted by the toys.

I’m not there next week because I’ll be at ICME training back at college, but if you go to the St Illtud Church facebook page, they’ll post pictures to show what’s been going on. St Illtud Church Llantwit Major Facebook