Another day of sunshine has reminded me that I was going to blog about making the most of the lovely weather over the weekend. We haven’t had any nice days for so long it took me a little while to relax and actually believe that it was going to stay sunny and not start raining at any moment. Steve was on the Arrow course all last week, so when it came to my day off on Friday I didn’t really know what to do with myself. I’d had car issues so after I picked my car up from Pontyclun (with some help from my lovely reader), I had a couple of hours to full before needing to pick the children up from school. It wasn’t enough time to really go and do anything, but too long to spend around Bridgend, so I ended up going back to Steve’s house to check the details on one of the kids school projects so I could do it with them when they got home.

The project was to plant some flowers in an old wellie that would then be used to decorate their school playground. I’d already identified some old wellies so all we needed to do with get some compost and flowers to put in them. So when I picked them up from school we went down to the garden centre (which they were surprisingly excited about), and chose some bulbs for them to plant. In hindsight, seeds probably would have been better for the size of wellies they had, but they were the first things we saw when we walked in and they were on offer. They were 3 for 2, so the younger two chose one each for their wellies, and then they chose one together to plant somewhere else. So we drove home, had a bit of trouble making holes in the bottom of the wellies, mainly because we couldn’t find a drill so were using screw drivers instead. Eventually we managed it, then went outside and filled the wellies, and another pot with compost, planted the bulbs, over-enthusiastically watered them, and then carried on.

While I was making tea the kids were allowed a waterfight (a nice easy way to get them into their pyjamas when their clothes need washing anyway). They had a great time, didn’t argue at all, and came in absolutely soaking wet. Even though it was the younger two that had wanted to do it, even the eldest got involved and got wet by the end. What started out with a couple of water-shooters quickly escalated into water balloon bombs and then tipping buckets of water over each others heads.

Fortunately their Dad got back not long after they’d finished tea, and the weather was nice again on Saturday so they were able to carry on playing football and rugby and obstacle courses to their hearts content. There was a slight hiccup when the youngest fell over on the decking and managed to get a splinter embedded in his hand, but a bit of magnesium sulphate paste soon sorted that and he was happily playing in the garden again a couple of hours later.

On Sunday I had quite a busy day, family Eucharist at St Illtuds, at which I somehow thought it would be a good idea to talk about the martyrdom of Stephen rather than Jesus ‘I am the way and the truth and the life’. However it tied in to the previous weeks Sunday@4 service where we’d been talking about bible heroes. So we talked about our favourite superheroes and their powers, and then what made real people superheroes, and then how Stephen was a superhero because he was chosen by the disciples because of his wisdom and faith. This led to mentioning that being a Christian at the time was quite dangerous, and asking why people do dangerous jobs, so why might we chose to be Christians even when it’s dangerous, what’s in it for us? So it rounded off quite nicely with sometimes being a Christian is dangerous, but we chose to do it anyway because it’s worth it, and if we ask God for his help he makes us superheroes by giving us his grace and his power and his wisdom, like Stephen.

My second service was a leavers service at St Donats for the second years at the college on site. It was a beautiful service. These students are particularly gifted so we were accompanied by a flute, one of the girls played her harp as we received communion, and a group of students performed a composition from another one called ‘Locus Iste’. The composition itself was fantastic, but the student group performed it perfectly, and it was quite moving listening to it. It was particularly poignant as the college and church community had mourned the death of one of the students earlier in the year, so the leavers service marked the end of what was a much more difficult year than normal. Some of the students have been coming to the church for two years, and are now going off to start at universities all over the world, so it was a difficult moment for a lot of the congregation who had got quite attached to them. We finished the service by praying for the leavers, and giving them a Welsh love spoon to take with them to remind them of their time with us. The service was followed by a lunch for the whole community, which was attended by a lot of the students as well as the local families, and was a lovely afternoon out on the lawn in the sunshine.

St Donats church is at the bottom of a steep lane, overlooked by the castle. My car this week has decided to give up with brake pads, so I decided it might be more sensible to walk down then screech down. On the walk back up after the service, I noticed a little hut off to the side with a path down, that I’ve never noticed before, as well as how beautiful the church is, so I was glad that my brakes had stopped me just driving past it again. 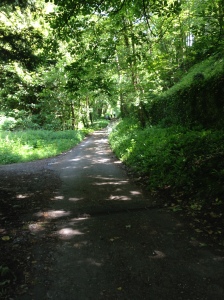 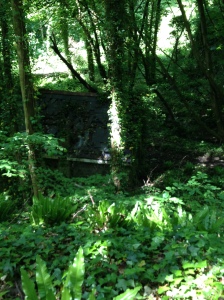 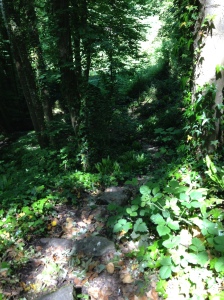 After a nice lunch out with Steve, I went to our annual Celebration of Marriage service, which wasn’t that well attended, probably because of the sunshine, but was a nice opportunity to see some of the couples who we haven’t seen since marrying them. After a day of storms yesterday, it’s nice and sunny again today, so the washing is out on the line, and I’m sitting in my study with the window open watching my mad cat run around the lawn, and looking forward to Toddler Church this afternoon.

One thought on “Enjoying the sunshine”