This week my Dad has been to visit because it was my graduation on Wednesday. He came for a bit on either side though and we had a chance to pop down to the beach. My Dad used to live in Ogmore-by-Sea, so he’s always very keen to get back to that part of the area when he visits me, and I love that coastline. One of the beaches we go to quite often is Dunraven Bay. Normally when we go, somehow, the tide is always is, so we never get any further than walking along the pebbles. On Tuesday though the tide was out and I saw the beach for the first time! 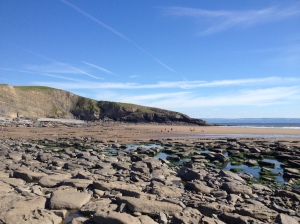 We had a wander to the far side of the beach, it’s the part I haven’t been to before because it’s always underwater. When we got there we noticed a funny shape rock and started walking towards it, only to realise it was a car engine. The metal parts had all become covered with tiny limpets, but you could still see the colours of the wires that were poking out of it. We wondered if it was from a car that had tried to drive across the beach and got stranded, or if a car had come over the top of the cliff and landed on the beach, or Dad suggested that it had been trying to drive across the channel to Devon. Not sure I’m convinced about that one. 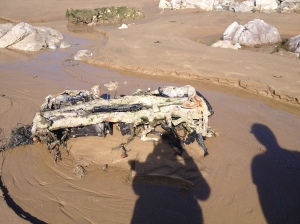 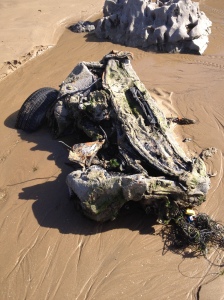 On the way back we wandered back towards the cliff to try and find some pebbles for a wedding-related project and had a chance to admire the distinct formation of the rocks around the heritage coast. When looking at the coast line it’s easy to pick out the layers between the rocks, so it gives it a stepped effect. This results in large layers of flat rock that extend onto the beach. In Dunraven there’s a point where three of these layers come together making it look like a series of lakes. I always find it beautiful. Particular the layers of flat rock as they’re never entirely smooth, they always have little hollows in them that collect the water when the tide goes out so they end up with little pools in them all day. 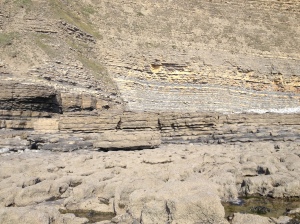 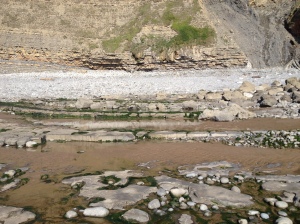 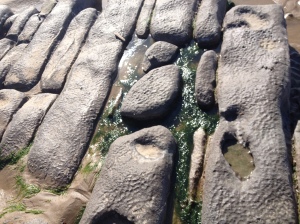 The other distinguishing factor of the heritage coast is that you can quite often see fossils embedded in the rocks along the shore. We found a few impressive ones on our walk. I don’t normally notice them but my Dad is a lot more observant and pointed them out, I don’t know how I normally miss them. 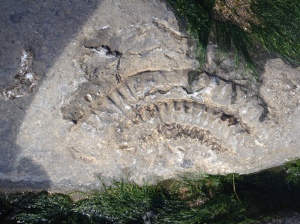 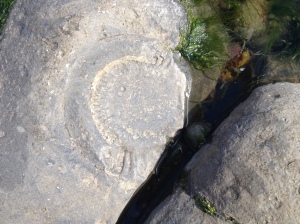 I’d always thought of Dunraven as a very scenic beach if you want to take clever photos, but not actually that useful. Now that I know that there is actually a big sandy beach, as well as the rock pools and impressive coastline, I’m more likely to come back in the summer if we’re having a day out with the kids. There were loads of families on the beach when we were there. A few playing crickets, swimming in the sea, clambering over the rocks. There were even lifeguards on duty so it’s clearly quite popular with at certain times of year. This has definitely become my new favourite beach. 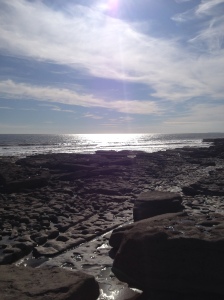