After a busy few months I’ve realised that I haven’t blogged in a while. Part of the reason is that settling into married life and a new job takes a bit of getting used to. But everything is going well, things are starting to fall into place and now that we have a more established routine- although it does change a bit every term with the kids after school clubs!- life is starting to get a bit more manageable, and even enjoyable! It’s still been a massive shock with the amount of changes over the last few months, but life is starting to make sense a bit more now!

But there has been another change in the household over the last few months that has taken up a huge amount of energy. Since I was a child I’ve been wanting to get a dog, and Steve has wanted one for years too but never been in a position to look after one properly. So in December when a breeder we follow posted some pictures of their latest litter, we knew we’d found the puppy we had been waiting for. At the start of December we drove up to Housty Kennels in Felindre, about half an hour outside Swansea, and picked up an 8 week old Springer spaniel puppy, who we called Luna.

She was so small when we first got her you could hold her in 2 hands. For the first few nights we let her sleep on the bed while she got used to us, but after a few sleepless nights we introduced her to a crate in the kitchen, which she slept in very happily pretty quickly. 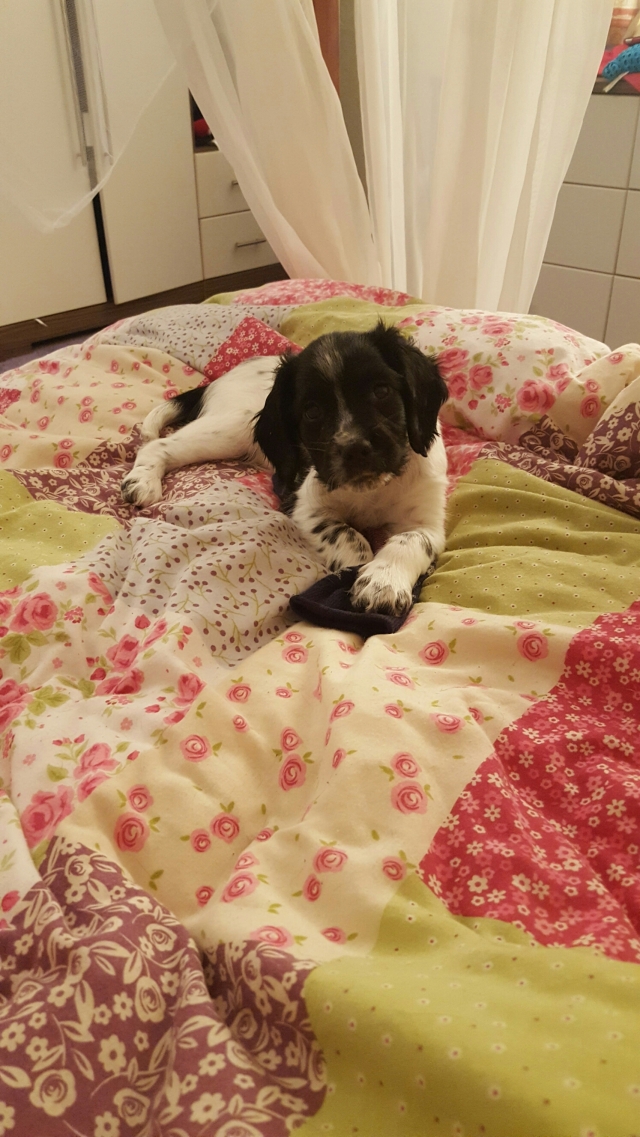 We weren’t prepared for just how manic a spaniel was going to be. She would have a mad couple of hours tearing around the house and then sleep for hours afterwards. She always had a particular love of socks- which is unfortunate as Steve always leaves them lying around. She’s only managed to completely destroy a couple of pairs so far, but that’s not through lack of trying!

Her first Christmas was particularly fun. We were worried she might attack the tree but she’s pretty smart so that wasn’t really an issue. She wasn’t even that interested in Christmas presents,  even the ones that were for her (mainly from my mother), she needed extra persuasion to go for. She loves people though so she was in her element having a house full when family came to visit.

Her absolute favourite thing to do though is go for a walk. She’s from a pedigree line of gun dogs so she loves being outdoors. She could play fetch for hours and will throw herself through anything to catch a ball. It took throwing herself through rock pools for her to realise she doesn’t like sea water in winter as she just gets too cold!

As smart as she is though, she still hasn’t learnt that there’s some things she can’t go through without getting stuck! 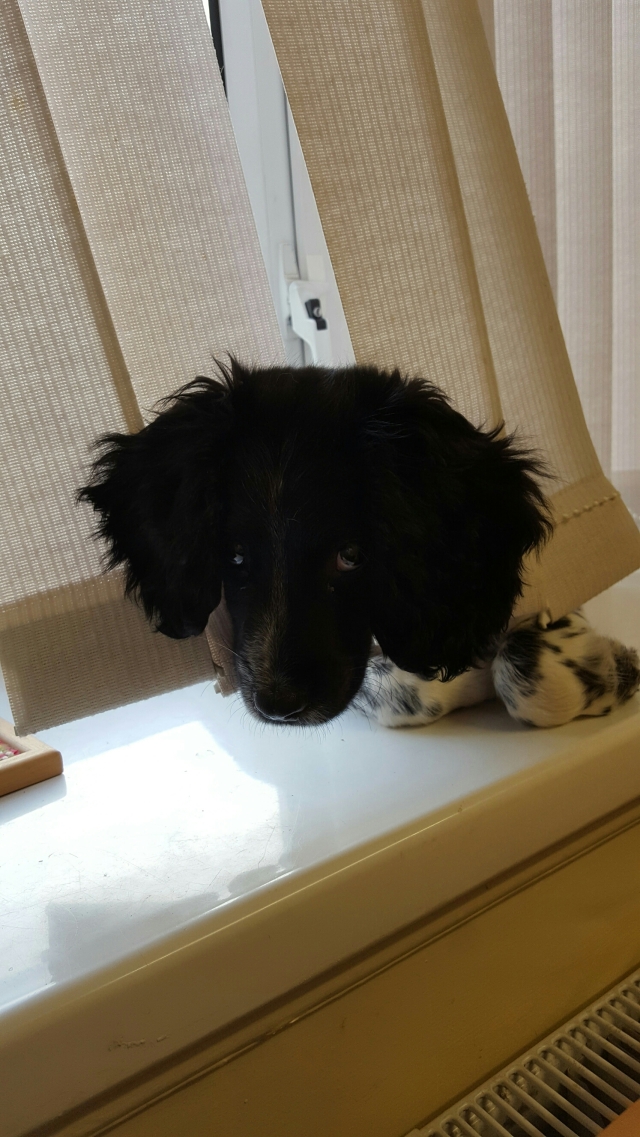 For a few months with Luna everything was going well. As far as we could tell, Luna was a normal excitable, athletic puppy. She was a bit on the skinny side but she had been small compared to her siblings, and was so active, we thought it was normal for her breed.

But then at the end of February, when she was about 5 months old, she started acting strangely. To start off with she was just sleeping a bit more than normal, but as the week went on she started to get more and more lethargic. She wasn’t interested in chasing the cats or attacking the curtains, and when I took her for a walk she didn’t go on her normal routine of sniffing everything in sight.

Soon we could see that there was something very wrong. Her head was swaying when she was sitting down and she wasn’t responding to us as normal. So we took her into or local vet who weighed her and poked her a bit, and told us she was malnourished and we needed to be feeding her more. We knew she was small but as she’d been in to be weighed every few weeks, we thought the vets would have already told us if she was underweight in a more worrying way.

So we took her home and increased her meals. By bedtime she still wasn’t herself so we decided to take her up with us to keep an eye on her, but she just couldn’t settle. She wandered all over the room, over our faces, just not sitting down at all. Eventually Steve moved to sleep on the floor with her and I moved into the spare room so at least one of us would get a good night’s sleep. The next thing I knew, Steve was waking me up at 7am after having taken Luna to the emergency vets at about 3am. She’d got worse during the night, to the extent of not having the ability to walk. The vets had sent off blood tests and Steve needed me to take the kids to school while he went back to transfer her to our normal vet.

The tests all came back saying that everything was normal, but in the meantime Luna was still getting worse. Around mid morning our vets called to tell us they were transferring Luna to a specialist vets in Bristol where there was a neurologist they thought might be able to help. We dropped everything and drove her to Bristol where the vets spent a good hour examining her. By this point she was barely moving in the car. For the first hour she just lay still on my lap. After a while she started moving around but she clearly couldn’t see what she was doing. She tried to move in the direction of our voices and so was aiming for as close to our faces as possible. She ended up wrapped around my shoulders, chewing on the seat belt- which still has little tooth marks. 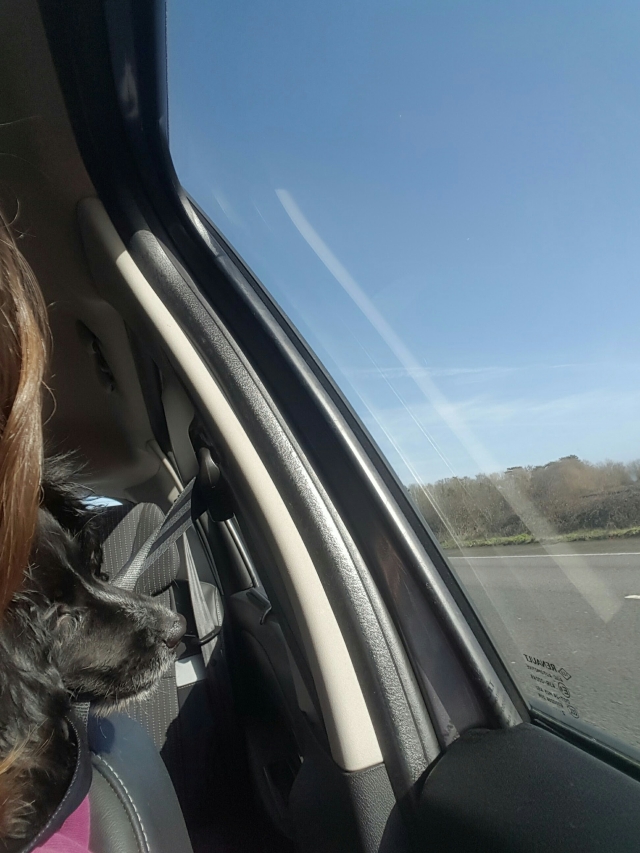 The neurologist did a lot of physical tests on Luna- pressing her legs against the table to check her depth perception, which was non existent, seeing if she would respond to our voices, watching her walking to check her balance, which didn’t work out too well for her either. She still kept her usual level of annoying by peeing on Steve, but just before we left she started frothing at the mouth and having a fit so was rushed off to be admitted.

We left the hospital an hour later convinced she would be given the best care, but not that we would be able to bring her home again. The vets gave us probably a 5% chance that she would make it. Over the next week the vets ran a whole load more tests which started to narrow down what the problem was. Over the weekend we were hanging on the phone,  as the vets checked in a couple of times a day, but the following week I was away on a course so it was a bit more difficult to keep up-to-date with what was going on.

It didn’t take long to work out that the problem wasn’t neurological, but related to her liver, so she was transferred to a liver specialist at the hospital. They worked with all sorts of theories, that she had eaten something with a toxin that had affected her, that her liver had been injured in some way, that she had been born with some sort of problem. As they gradually worked out what was going on they were able to work out how to treat it and Luna began to look a lot better. After a few days they worked out that the blood vessels that should be going through the liver to filter toxins out of the blood, were actually going around the outside, so that everything she ate- including her normal dog food- was poisoning her. Even now they haven’t worked out what caused the vessels to do that, but there’s only 1 dog on record having been born with multiple vessels bypassing the liver.

They started her on a cocktail of medications including anti-fit medication, stuff to work on toxins, and stuff to speed up digestion so that less bad stuff could even be passed into the bloodstream. She responded so well to the medication that by the middle of the week she was able to come home while they waited for results of a liver biopsy to work out if there was a problem with the liver itself. A couple of weeks the tests came back still not able to pick up a problem. That gave her a better prognosis but she’s still not out the woods yet.

Luna’s been home for just over a month now and the liver condition is managed with medication and a special diet. She’s fed 4 times a day now, one set of pills twice a day, and a set of pills and 4ml of lactulose three times a day. The amount of everything she gets is under constant review as she grows, and we just don’t know how long it will do the trick. We could have her for a few months or a few years, the prognosis is good as they haven’t found a problem with her liver (yet), but at some point the medication will just stop working.

The good news is that the Luna we have back now is exactly as she should be. The excitable puppy we had before was only functioning at about 60% capacity, we now have a 100% crazy spaniel. 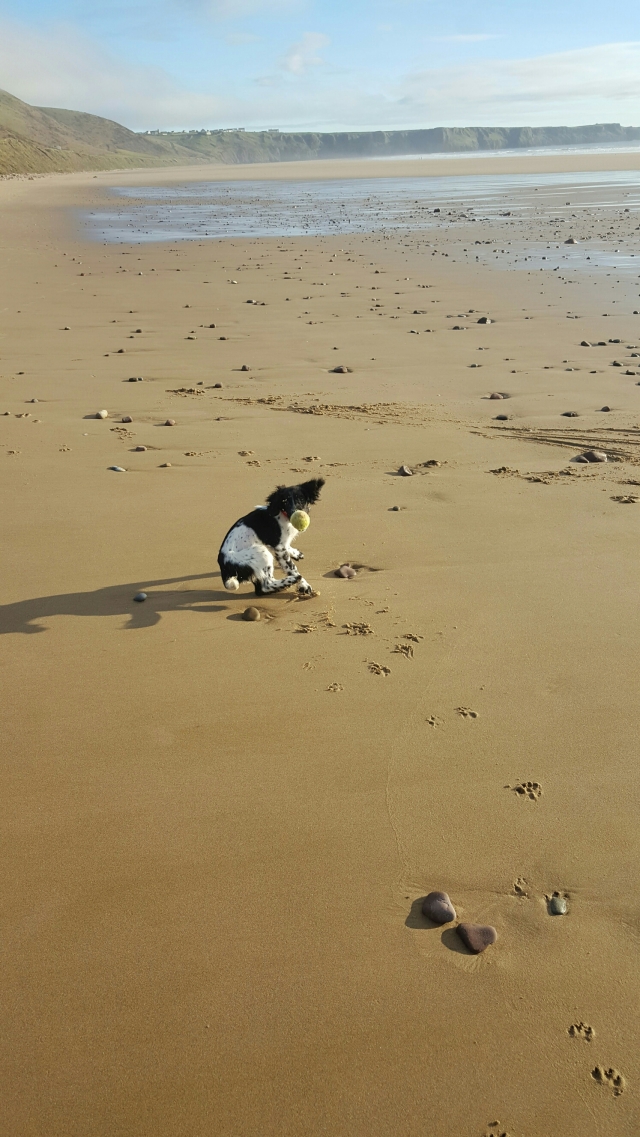 She still loves being outside but now she runs twice as far and as fast as she did before. She springs like a proper spaniel and can launch herself in the air. She’s incredibly smart and won’t leave you when you let her off the lead. The only negative change in her behaviour we’ve had is that she is now a lot more aggressive about food.She wasn’t massively interested before but now she will take any food that’s left unattended, and she particularly likes apples, banana peels and Satsuma skins. She’s also a bit obsessed with chewing gum- post chewed- which is weird.

It wouldn’t be too much of a problem because we keep a pretty close eye on her, except that once she’s got hold of something she gets quite protective and will go on the offensive if you try and take it off her. Steve and I have the bite marks to prove it.

Fortunately the rest of the time she’s her old lovely self. Getting taller and longer at last and starting to fill out. The kids are thrilled to have her back and she’s definitely a huge part of the family. It feels so natural having her with us, and we can’t really remember life before her. I don’t want to became one of those people who only ever talks about their dog though, so this post should get it out of my system and you’ll only get little updates from now on! 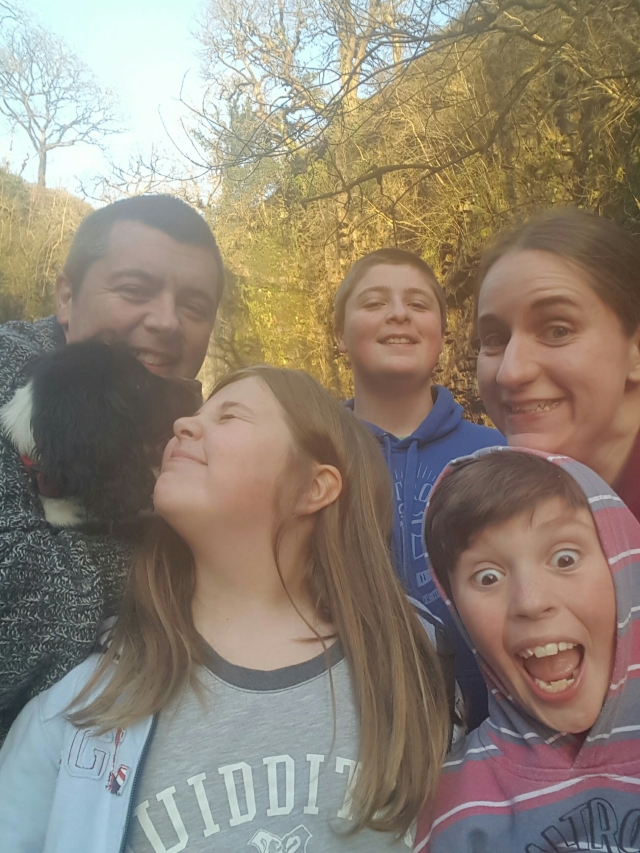